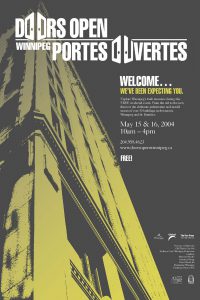 Doors Open traces its roots to France in 1984, with the introduction of La Journée Portes Ouvertes des Monuments (Monuments Open House Day). Put on by the Ministry of Culture, the event was intended to encourage the people of France to discover the country’s rich heritage, including arts, culture, archaeology, industries, agriculture, rivers, military and more. The event was such a success that it quickly spread throughout Europe, with events in the Netherlands, Sweden, Ireland and Belgium. In 1990 Scotland was the first to host such an event under the name Doors Open. By 1991 these events had all become a part of European Heritage Days, a consortium of free events taking part in 50 countries each September, welcoming up to 20 million visitors annually.

Doors Open arrived in North America in 2000, as a millennium project in Toronto. Hosted by Heritage Toronto, the weekend long event saw over 150 culturally significant buildings opened to the public for free. It has since become an annual event, attracting over 2 million visitors.

The inaugural Doors Open Winnipeg event was launched in 2004 by Heritage Winnipeg and the Downtown BIZ. Starting out with 30 buildings in the downtown and St. Boniface areas, the event had expanded throughout the city by 2007. Doors Open Winnipeg is now held annually during the last weekend of May. The public is invited to take walking tours and explore built heritage treasures, cultural institutions and other buildings of interest not normally accessible to the public, all completely free of charge! This event is both entertaining and educational, attracting tourists and local residents, and increases our civic and community pride by proudly displaying Winnipeg’s architecturally, culturally and historically significant buildings.